The red carpet can be a dramatic place when you have some celebrities crossing the borders of what we consider normal in order to steal the show.

However, as much as we are their fans, sometimes they mess up and we are always here to criticize some of these styles. Skimpy dresses are not uncommon for most red carpet events including the Emmy Awards. In this list, we are going to expose the scimpiest dresses ever worn to the Emmy’s.

11 Skimpiest Dresses Ever Worn to the Emmy’s

Heidi Klum knows that she has legs for days. In the 2012 Emmy’s she wore a long dress with a front slit. Although the dress was floor length and free-flowing, it had an open cut from the thighs up to the floor. She looked fabulous in the blue Alexandre Vauthier gown that had a low-cut V-neck too. The paparazzi were all over her as she posed for the camera with the open-thigh dress.

The dress Ariel wore at the 2017 Emmy awards can only be described as bold. With two thigh-length slits on the front, she was ready to take over the celebrity show. Apart from the dangerously high slits, the dress by Australian designer Steven Khalil had a low back design and a see-through fabric. The 19-year-old said she was looking for something different because she has always shown cleavage and not the legs. True to her words, this was something out of anyone’s comfort zone.

The high slit trend has been there for a while and Leslie decided to refresh it in 2017 Emmy’s with a custom Christian Siriano dress. With a combination of glitter and sheer fabric, this tight-fighting dress hugged every part of her body. Black is a powerful color so this dress was exuding elegance and class in every way. The sheer material at the top showed some cleavage and the high-thigh dress was showing her beautiful legs.

Janel is the pacesetter for naked dresses. In 2003, before naked dresses became mainstream, she rocked the red carpet with a sheer revealing dress. The low-cut spaghetti dress was body-hugging around the bust and hips. The unique combination of blue, beige, and purple fabrics also made it unique. We can confidently say that Janel’s dress was the inspiration behind the many nude dresses that we see today.

Let’s face it. Deep front plunges are not for everyone. You need a high level of confidence and a certain type of body shape to confidently wear a dress that plunges to the navel. In 2017, Gina Rodriguez surprised everyone with a red glitter-neck plunging dress. The neck was low cut to almost reach the waist. It was a free-flowing, long sleeve dress so she was very intentional about keeping the other areas covered.

Naked dresses have always been controversial. It is no surprise that Lucy Liu’s dress was considered the worst dress at the 2000 Emmy’s. The sheer Versace dress was long and free-flowing. However, it left the legs and the sides on full display. This dress looked like any traditional naked dress but it caused a lot of controversy in 2000. We can only say that the dress was ahead of its time considering that naked dresses are now in trend.

Zendaya is a very sexy woman and the green corset dress she wore in 2019 added to her sexiness. The upper part of the dress was made of sheer fabric in a corset design leaving nothing to the imagination. You could see the entire upper body through the dress. It also had a thigh-high slit adding to the sexy look. Green is a very powerful look and the dress complimented her body tone and curves.

Emilia has always been known for her sweet and blonde look. However, the dragon queen decided to show off with a really low plunging maxi dress. The navy blue dress had a neckline cut low to high waist so she was showing most of her upper body apart from the bust area. The bottom of the dress was free-flowing to touch the floor.

All eyes were on Issa Rae at the 73rd Emmy Awards on September 19, 2021 due to her sheer metallic dress. To accessorize the dress further, she decided to add a metallic grill for sparkle. She added the wow factor to the celebrity show by bringing something unique. Her makeup artist added that she completed her look with affordable makeup products under $15.

Keri Russell’s Zuhair Murad dress is considered one of the sexiest dresses. This black dress had two thigh-high slits and Keri was not afraid to show off her legs. Apart from the high-cut slits, the dress also had a plunging neck going all the way to the waist. There is something about a black dress and this dress was exuding power and sophistication.

Taraji has always been known as the red carpet star. Unfortunately, she did not do well with this look at the 2021 Emmy’s. It was a bit too much considering that in 2021, many celebrities were going for classic looks. The free-flowing gown was a naked look style with a low plunging neckline. However, we love the pockets that added a unique touch to the dress.

How many Emmy categories are there?

There are currently 17 Emmy’s categories. The latest addition is a sports category. However, the common ones include; drama, comedy, limited series, lead actors, supporting actors, and many more.

Celebrity shows are never out of out-of-the-ordinary fashion styles as the A-listers compete for a place in fame. The Emmy Award Shows are not an exception and we found out the skimpiest dresses ever worn to the Emmy’s. 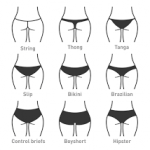 Types of Panties and their Names956 Total Shares